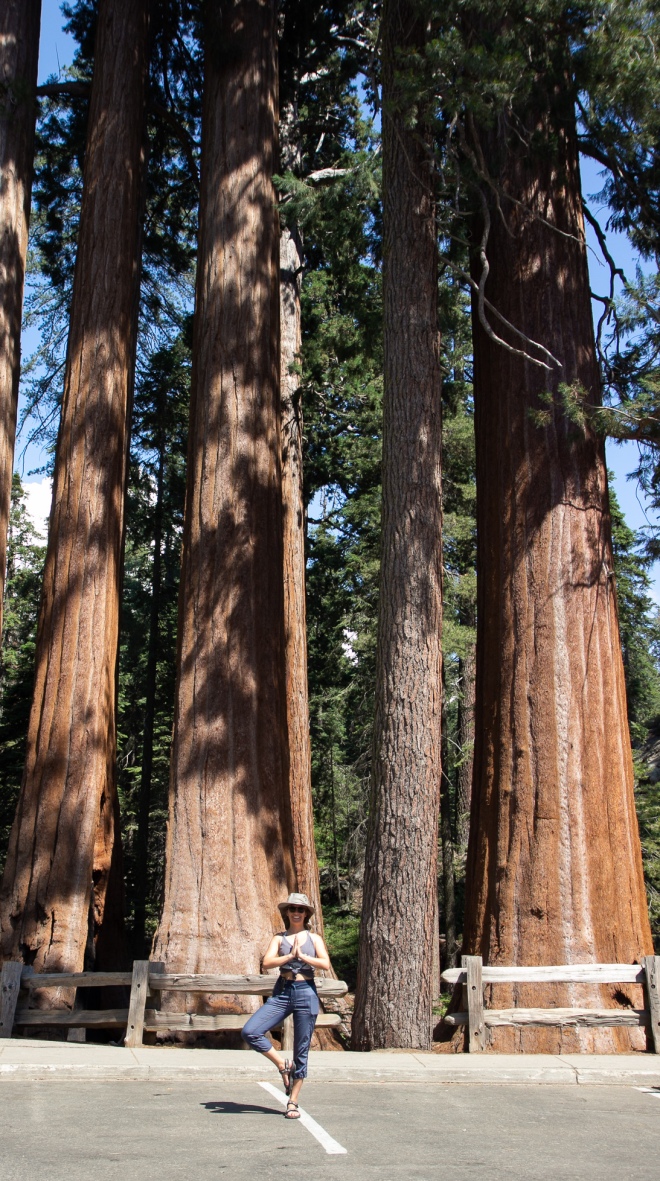 King’s Canyon National Park, sister to Sequoia National Park, boasts some of the most beautiful canyons, rock formations, and giant trees in California, but is, surprisingly, one of the lesser known National Parks in the state. There’s so much to see and do in this section of the Eastern Sierras though, and the hiking trails should definitely not be overlooked. Luckily for you, I’ve compiled the three must-do hikes in King’s Canyon National Park in order of difficulty, including the skinny on what you should know about each.

The General Grant Grove Trail is home to the General Grant tree, which is not to be missed. At 267 feet high, General Grant towers over every other tree in King’s Canyon National Park – and is famous for being one of the largest and oldest trees in the world! Here are some incredible facts you might not have known about it:

-General Grant is over 1,500 years old!
-The tree was named after Ulysses S. Grant in the 1860s.
-Later nicknamed the Nation’s Christmas tree by President Calvin Coolidge in 1926, and then declared a national shrine by President Dwight D. Eisenhower for those who sacrificed their lives in war, General Grant is one of the most notable trees in history.

The General Grant Grove trail is actually very easy to get to, and offers stunning views and a few other notable sights, including Gamlin Cabin, Fallen Monarch, and Centennial Stump.

Access this trail from the General Grant Grove parking lot. The entrance is easily marked with a park map at the head of the trail. You can wander in any direction along a very clearly marked path and create your own agenda. The trail is roughly 1/3 mile – unless you go off exploring – and is filled with beauty and an overwhelming silence that permeates to your very core.

Note that pets are not allowed on this trail, and you will need to drive there yourself and park in the parking lot. This lot tends to fill up pretty quickly, so aim to get there early in the morning. Additionally, this trail is very popular (people come from all over the world to walk it!) so take note that there might be large groups of people around you at all times. If a quieter, less trafficked route is your cup of tea, read on!

To skip the crowds at General Grant Grove, head to the left of the parking lot where the RVs and buses park to North Grove trail. This trail is fairly easy and heads downhill in the beginning with a slight incline greeting you as you head back out. The entrance to North Grove trail, sunset trail, and the short pit stop to Fallen Goliath or Dead Giant Loop can be accessed from here. North Grove trail is approximately 1.4 miles long and loops you back to the General Grant parking lot or on to Sunset Trail. You can also take a little detour to the giant fallen Sequoia tree known as Fallen Goliath along the way.

This trail is much quieter – I actually didn’t come across anyone on it – and wildlife thrives here. I witnessed deer, birds, squirrels, and more on this trail. You’ll also get a closer look at the giant Sequoias in this forest here. The trail is well marked, (there are arrows on trees to guide you) and there are signs at every section where the path diverges.

Be wary of the mosquitoes as they’re pretty hungry around these parts, however, that’s nothing a little homemade mosquito spray can’t battle. Here’s my favorite concoction:

Held in my heart as one of the most beautiful and rewarding hikes in King’s Canyon National Park, Mist Falls is the trail that has it all. You get a workout, stunning views of Paradise Valley below, pit stops at a lake and a waterfall, and access to a few bouldering problems to try at the beginning of the hike too! If you’re adventurous and love hiking, this is the hike for you! Also, since the trail winds in and around a river it’s pretty covered for most of the hike, so you don’t have to worry too much about the heat during the summer months.

Mist Falls Trail is a 9-mile trail that takes you out to the waterfall and then back to the parking lot. Park at Road’s End parking lot (I know this sounds confusing, but this is actually the name of the road) which is located at the bottom of King’s Canyon National Park. This scenic drive takes you down into the canyon and is stunning with picturesque views of waterfalls, rivers, lakes, colorful rock formations, and lush foliage. Give yourself plenty of time for this drive as it takes about 40 minutes to get all the way down to the bottom.

The first two hours of the hike are on sand and there aren’t that many trees along this part. Be mindful of this and wear a hat and/or lots of sunscreen. You’re also going to want to bring plenty of bug spray. This section also has boulders perfect for scrambling or climbing on. I only recommend bouldering if you know what to look for as these boulders have yet to be rated.

You’ll pass a forest shortly after and large granite walls, which were formed by glaciers long ago! As you get closer to the waterfall, you will start to climb up, with the steepest part leading you to the falls. Mist Falls actually gets its name from the incredible mist that douses all who come close to it in a cold cloak of water. It feels exhilarating to be so close to so much power. Plus, it’s an amazing way to cool off before hiking back down! Be careful of the mist when you take photographs.

Note: Please be safe on this hike and don’t swim in areas where the river water is rushing quickly past you. Opt for swimming in calmer waters. Rattlesnakes have been seen on this trail too, so watch where you step. Also, this trail gets quite hot during mid-day, so aim for an early morning hike – thank me later.

King’s Canyon National Park reminds me of Yosemite’s attractive, lesser known brother, with its vast landscape, epic walls of granite, and incredible hikes. There’s a lot of history in this park, and its trails are definitely worth a visit. John Muir once shared that the Sierras were his favorite place to visit, and its no shocker to me why he said that. If you’re looking to plan your next adventurous vacation, I highly recommend King’s Canyon. There’s a trail here for everyone.

© Tickledbytravel.com 2019. Unauthorized use and/or duplication of written material and/or photographs without written permission from this site’s author and/or owner is strictly prohibited. Excerpts and links may be used, provided that full and clear credit is given to Tickledbytravel.com.